Reviewing our event: From Awareness to Behaviour Change 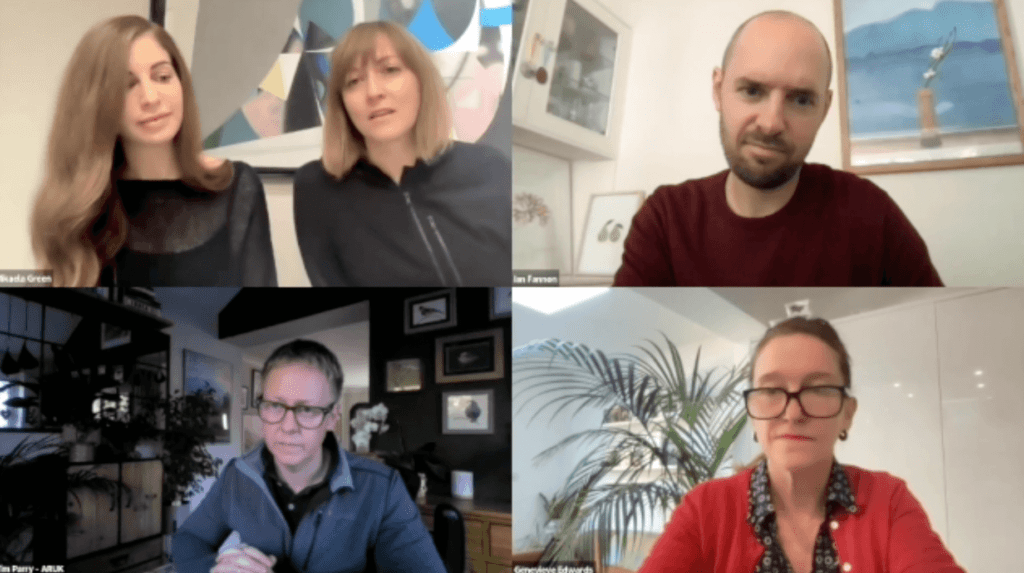 A big thanks to all our speakers at our latest event – From Awareness to Behaviour Change. Our biggest event yet with more than 300 people signing up, we took a look at how two major UK charities are moving their audiences from awareness raising to tangible behaviour change.

Lots of behaviour change examples were woven into the case studies including reframing, the development of tools that increase people’s capabilities to change and how the application of behavioural theories to comms, such as being where people already are at the point of delivering key messages, can have greater impact.

We kicked off with a talk from Samuel Salzer – a behavioural scientist and associate for Claremont – who set the scene by talking us through the importance of doing more than simply raising awareness and the pitfalls of doing so. He used the example of the early 90s, US version of the ‘5 a day campaign’ to demonstrate how, despite raising awareness by 400%, they managed to have 0% impact on behaviour change targets.

He introduced one of his (and our) favourite models, the COM-B model, explaining how the combination of creating or increasing capability, opportunity and motivation is needed to change behaviour. 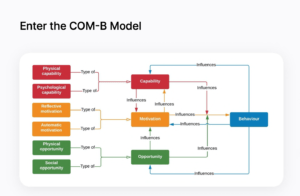 He wrapped up with a thought-provoking quote from Edward Deci (creator of the self-determination theory):

The question should be not how can we motivate others but how can we create the conditions within which people motivate themselves?

Next, we heard from Tim Parry, Director of Communications, Brand & Digital at Alzheimer’s Research UK, and Claremont’s Ian Fannon who discussed the journey of Think Brain Health the charity’s public health campaign for mid-life adults which aims to help people reduce their risk of getting dementia.

Up to 40% of worldwide dementias are preventable, through lifestyle choices and behaviours, but only a third of people know this and the people who need to know about it (mid-life adults) are likely to ignore anything relating to dementia.  A clever reframe of the campaign to focus on brain health instead of dementia meant the charity were able to position themselves well amongst this audience and significantly increase awareness and engagement in the topic.

Think Brain Health is now using its versatile and approachable style to move into a behaviour change posture with a focus on tooling people up to better understand how they can improve their brain health with specific details and tips.  We were given a sneak peek of these tools and support that have been developed with behavioural scientist and co-speaker Samuel. 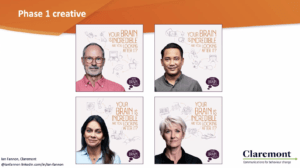 Finally, we heard from Genevieve Edwards, CEO of Bowel Cancer UK, who outlined that the key challenge with tackling bowel cancer rates in the UK is getting people diagnosed early; not that easy when less than half the population are aware of the key signs and symptoms.  Genevieve talked about the charity’s latest successful partnership campaign – #Getonaroll – inspired by Bowelbabe in which every major supermarket in the UK has agreed to print the signs and symptoms of bowel cancer on every packet of loo roll. This approach is helping to increase understanding about symptoms at a moment that feels relevant and timely, i.e. when people are more likely to be thinking about their bowels. 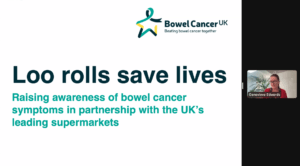 In the Q&A the panellists explored the role of celebrity’s experiences in helping to raise awareness and engagement but the subsequent challenge that comes with sustaining engagement (no silver bullet on that one). Samuel shared another model – The Behavioural Drivers Model, (developed by Unicef) – in which the limitations of one’s own sense of agency is covered in a lot more detail and the role of partnerships was discussed, specifically how teaming up with the right organisations can help to makes changes at more of a systemic level.

Thanks to all who came. Please find a recording below for anyone who’d like to watch (or re-watch).